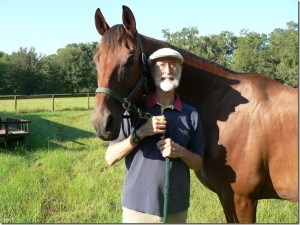 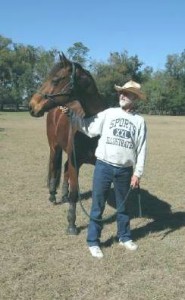 With the possible exception of old Blue, Davey may be the most intelligent horse I’ve ever known. Cindy met him when he was about five, I think. He was owned by Paul Hill, who was trying to sell him as an event horse. He was big, beautiful and gangly with a sensitive, friendly eye. Friendly, that’s the key word. Neither Paul, nor anyone who handled him since, was ever harsh or mean to him. So when a stranger came up to his stall, Davey was always right there at the half door, curious to meet this new friend (and maybe con him or her out of a treat!)

Anyway, that’s water over the dam now. You all know his story. How he rose to become one of our top event horses, was long-listed for the 2004 Olympics, and in an extended international career with Cindy amassed more than 340 British Eventing points. His official name is Ashdale David’s Way, for those interested in looking up his record.

I’ve got him now- have since February of 2008. He’s twenty-one, and lives with Carol Ogden on her little twenty acre farm, along with Brogan and Danny, Carol’s thoroughbreds. I like to think he’s as happy in his retirement as I am to be privileged to care for and ride him. We go out with Carol and Brogan to one of Florida’s lovely state parks twice a week for a trail ride and gallop; there’s still a spring in his step, his ears point alertly ahead, and he nearly always out-walks the other trail horses in our group.

From the outset I had admired his physical ability, having watched him perform in all his CCI’s (Concours Complet International), but I really didn’t become aware of his calm common sense until he came to live with us in retirement. He was still perfectly sound. He had only one small splint on his left fore cannon bone; no other blemishes to show for eight years of high level eventing. What brought about his retirement was something called “kissing spine”, where the cartilage between the vertebrae wear away from the impact of continuous jumping. It’s a very gradual thing. You only become aware that something’s amiss when you notice his dressage isn’t quite what it was, and he’ll occasionally refuse a jump he used to take with ease. Not that Davey was prone to refusals in competition. The only one he ever did in a CCI was at Burghley CCI**** in 2004.

He was sitting in twelfth place after dressage, and had started out on cross country like a locomotive. He was exactly half way around the long and difficult track, and I had him clocked at exactly optimum time. Pat and I were watching the television monitors in the owner’s tent. The pair of them galloped down a steep hill to obstacle 20, the first water complex, which featured a tight double bounce into the pond. Once his adrenalin was up, getting Davey to shorten stride was always a major challenge on the flat, not to mention doing it downhill. Consequently, he might have come into the bounce a bit long. At any rate, he took the jump in nicely, then decided he hadn’t room to get out, and swerved sharply right, sending Cindy flying over his left shoulder into the water with a spectacular splash. If you’ve got the CD of Burghley 2004, it’s featured toward the end, because it demonstrated the added safety provided by a frangible fence. Officials and fence judges all felt the frangible pole allowed Davey to lean against it and avoid flipping over into the water and onto Cindy, thus preventing a potentially tragic accident.

No doubt Davey misses the competition. I remember one day we were riding at Canterbury and happened to walk across the dressage arena, which was set up for a coming show. We were walking relaxed, with loose rein, when he no sooner recognized where he was, than he pulled in his head, rounded his neck, tucked his rump, and was all set to compete!

But back to the point of my story- Davey’s intelligence. We have an idiosyncrasy, somewhat to Carol’s annoyance. He likes to graze unencumbered by a human on the other end of his lead line, so I let go of my end, and allow him to feed on the grass at his pleasure. This is dangerous for most horses, as they will often panic and jerk up their head if they accidentally step on their lead rope. Not Davey. If he steps on the lead, he casually goes on eating, and when he’s ready, steps back and frees himself. What gets to Carol is, he’ll occasionally wander over to Brogan while he’s being washed down, and rub his chin on Brogan’s neck!

This particular day in May, we had just had a nice one-and-a-half hour ride on O’leno State Park’s beautiful trails, and were letting our horses graze after cooling them off at the wash rack. Bugs are a menace from about April on, particularly deer flies, so I usually carry a horsehair fly whisk when we ride in summer. That’s one thing Davey never has adjusted to: insects are so much more plentiful, varied and aggressive here in the States, and they drive him to distraction. He was over in the shade enjoying the fresh green grass- it had rained a couple of days before- and I was about twenty feet away, thinking about nothing in particular, when suddenly, he jumped about two feet in the air. One of those monster big horse flies had landed in the middle of his back, just where there was no hope of getting it off with his tail. It had to be over an inch long. Now most horses, and dogs too, for that matter, would have gone racing around in circles, trying futilely to get rid of the thing. Not Davey. He made a beeline for me, screeched to a halt at my side, not nose to face, but turned sideways, so I could most easily get at that awful bug.

Which I did, of course, but it struck me then, “How many horses would have had the sense not to go nuts, and to recognize immediately that they couldn’t get at that damned fly, but they knew who could?”