ctober 4th preliminaries.  I was very fortunate to participate on my grey Dutch Warm blood cross, High Cotton, now age 8.  It was a long and testing week of qualifying competition culminating with championship finals at the Virginia Fall Races in Middleburg, Virginia.  Each day of qualifying was a challenging day of hunting beginning with Keswick Hunt, Cassanova Hunt, Snickersville Hunt, and Piedmont Hunt.  Each day of hunting involved three to four hours of galloping and jumping in the Virginia hills and mountains.

I was lucky to have two wonderful colleagues on the trip, Ms. Patti Brantley of Flying Colors Farm in Tallahassee, and Ms. Anna Billings of Little Pond Farm in Tallahassee.  We are all “flat landers” of course, and on the first day we met the “death coop” which was a large 3’6″ coop set down in a gully with the road directly on the hill on the other side.  The judges rode around us all four days, giving challenges to the horses and riders and taking notes.  Unfortunately, the “death coop” hung a judge and her wonderful horse up on the top of it, however, eventually was able to dislodge and get to the other side.

One of the funniest moments occurred at Cassanova Hunt where we were lined up at the edge of the corn field with the judges taking notes.  All of a sudden the hounds opened up with some very loud cries and there was a strange black shape coming at us at high velocity.  Then came the cry-“Bear!” and we braced for the worst.  The whippers-in began shooting shot in the air to break the hounds off the bear.  Horses spooked and whirled, and then a view of the bear followed by the hounds……and then Momma Bear!  Fortunately hounds obeyed and broke off.  Bears galloped backed to the woods.  Yours truly was still sitting on top of a wide-eyed, but very still, High Cotton.  Thank God!

All of our group were chosen for the finals and we began with a mock hunt at the Middleburg steeplechase track jumping ginormous stonewalls into and out of the woods.  The field was pronounced the most competitive in the 28 years history of the event.  The judges were looking for abona-vide field hunter who had style, movement, manners and tractability.  Judge Lilith Boucher noted it takes brains, beauty, form, function, and the skill to gallop a fence, race down a hill and all of a sudden “hold hard” and slide to a stop at the bottom to avoid freshly planted crops, hardtop road, or errant hound.

We were very lucky to make it in the winner’s circle.  Patti Brantley won best turned out with an absolutely impeccable presentation.  I won the Jan Ruetz memorial perpetual sportsmanship award, which was a great honor as my name will be engraved with some of the finest foxhunters in history.  We were so proud of our Florida contingent and our great horses, returning on cloud 9. 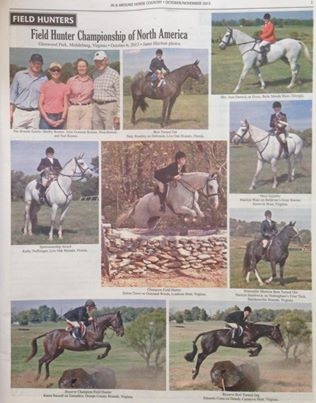